Perhaps these Thai Muslim insurgents in Thailand's restless predominanbtly Muslim provinces like Narithiwat are getting outside help from Malaysian sympathizers across the border.

BANGKOK - To support a renewed push against a Muslim insurgency in southern Thailand, the Royal Thai Armed Forces has embarked on a gear-and-vehicle spending spree.

The purchasing blitz is geared toward unrest in the kingdom's Malay-Thai borderlands, where a Muslim separatist movement has left more than 3,000 dead. The killing campaign in Thailand's deep south has adopted some of the Iraq war's more gruesome features: beheadings, AK-47 attacks on civilians and near-weekly car and roadside bomb attacks.

"The situation in the south can at best be described as stable," said Abhisit Vejjajiva, Thailand's premier and de facto defense chief, in a recent session with foreign journalists. "It hasn't deteriorated, but it hasn't improved markedly."

But Thailand's new coalition government is refocusing efforts on the troubled south. The military has set aside $214.6 million this fiscal year for the insurgency, as well as a $557.9 million six-year budget to set up a special infantry division entirely devoted to the southern unrest.

Six Russian Mi-17 V-5 helicopters, sold for roughly $9 million apiece, are among Thailand's most recent purchases. This model, favored by the Chinese and Indian militaries, is designed to tolerate gunfire and can be fitted with laser-guided missile launchers and swiveling gun turrets.

The helicopter "must be capable of carrying lightweight howitzers and can be transformed into a flying hospital," according to a Royal Thai Army procurement request. The Mi-17s can also carry up to 30 troops.

This aircraft order, a first between Thailand and Russia, signals a retreat from the American-built Bell helicopters that Thailand has used since the Vietnam War. The Thai Army has backed away from some repair projects for its current helicopter fleet, mostly Bell-made UH-1 Iroquois choppers.

Only helicopters can penetrate the dense, tropical interior where insurgents are believed to hide, said Zachary Abuza, a professor at Boston's Simmons College and an expert on Islamic violence in Southeast Asia.

"There are very few roads," Abuza said. "Even a Humvee would have trouble getting around in jungle that thick."

In future years, Thailand may seek up to nine cargo helicopters used for "transport, combat resupply and medical evacuation," according to Army procurement proposals.

Outside the jungle, car bombs and remote-control roadside explosives have become signature attacks in the insurgency, which has targeted random bystanders as well as soldiers on patrol. The military has even created its own explosive ordnance disposal suit to fit the dimensions of Thai soldiers.

And as the spate of bombings continues, the Thai military is amassing some of the same mine-resistant vehicles used by U.S. forces in Iraq and Afghanistan.

Thailand has ordered at least 85 REVA III four-wheel-drive armed personnel carriers, at roughly $310,000 per vehicle, from South Africa's Integrated Convoy Protection firm. Designed with Iraqi conditions in mind, the carriers are built to withstand rocket-propelled grenades, roadside explosives and land mines. The REVA, according to its makers, opts for rounded edges in the vehicle body instead of welded edges, which are more likely to separate during a bomb blast.

To boost its small arms stocks, the Thai Army is set to replace many of its aging rifles with 15,000 TAR-21 Israeli assault rifles and more than 500 Israeli Negev light machine guns. Those combined purchases total more than $34.5 million.

Thailand's government, still healing from a rash of street protests lasting most of last year, has returned its focus to the southern insurgency. Abhisit, the recently appointed premier, hopes to settle the region enough to lift martial law and end emergency decrees in the provinces bordering Malaysia. The decree has been extended 14 times.

Still, Islamic militants seeking independence from Thailand have kept up their attacks. Many hope to reclaim the lost Muslim kingdom of Pattani, which once existed in what are now Thailand's three southernmost provinces. The insurgents have torched schools and Buddhist temples, shot secular teachers and even decapitated a monk.

"The troops can't be static. You need rolling checkpoints, penetrating the interior," he said. "For a while, they had a fair number of troops down there, but you never saw them. They never left the barracks."

The Thai military has conducted a "very passive defense," Abuza said. The military's street presence is relatively light, with some soldiers riding tandem on motorbikes: one driving, one facing backward with his M16 machine gun. Some soldiers cruise violence-plagued areas in makeshift armed personnel carriers - pickup trucks rigged with steel barriers around the truck bed.

"I don't think they need a lot of extra troops and equipment," Abuza said. "They just need soldiers willing to take the fight to the insurgents."

Some in the U.S. military's Pacific Command, noting similarities between insurgencies in Thailand and Iraq, have considered joint operations with Thailand's Army. But the American and Thai governments have never strongly pursued the idea. Thailand, among America's strongest Asian allies, was previously aided by U.S. forces during its long and bloody fight against communist rebels during and after the Vietnam War.

Though each of the Army's four regional divisions now devote troops to the insurgency, they will coalesce this year under a new infantry division headquartered in Pattani, the bloodiest province. The new government also is developing an economic plan and other nonmilitary measures aimed at calming violence in Thailand's deep south.

"My plan, and my hope," Abhisit said, "is that we soon won't have to rely on emergency decrees to achieve peace in the south." 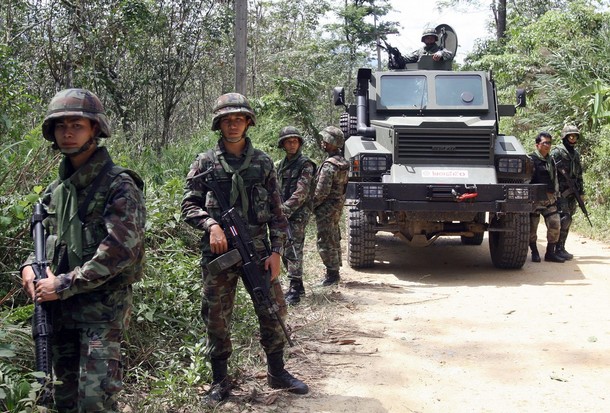 France promises to do its bit in big Indo-Pacific pond

Trying to foster greater resilience in your organization?