Just a week after Boeing unveiled their export-centric 'loyal wingman' combat drone concept [ http://www.thedrive.com/the-war-zone/26656/boeing-will-unveil-this-loyal-wingman-combat-drone-for-australias-air-force-tomorrow ], the Air Force Research Lab has announced that their own similar endeavor, dubbed the XQ-58A Valkyrie, has made its first flight. It also posted the very first image of the aircraft that has been developed under a veil of secrecy over the last two and half years.

A press release from the USAF about the aircraft's first flight reads:

This joint effort falls within the Air Force Research Laboratory’s Low Cost Attritable Aircraft Technology (LCAAT) portfolio, which has the objective to break the escalating cost trajectory of tactically relevant aircraft. The objectives of the LCAAT initiative include designing and building UAS faster by developing better design tools, and maturing and leveraging commercial manufacturing processes to reduce build time and cost.

Developed for runway independence, the aircraft behaved as expected and completed 76 minutes of flight time. The time to first flight took a little over 2.5 years from contract award. The XQ-58A has a total of five planned test flights in two phases with objectives that include evaluating system functionality, aerodynamic performance, and launch and recovery systems.

'XQ-58A is the first example of a class of UAV that is defined by low procurement and operating costs while providing game changing combat capability,” said Doug Szczublewski, AFRL’s XQ-58A Program Manager.'"

Beyond finally breaking cover as the USAF's 'attritable' unmanned combat air vehicle concept, the XQ-58A is really the first Air Force UCAV concept we have seen since all the momentum towards fielding any sort of this type of hugely promising aircraft suddenly dematerialized the better part of a decade ago. The XQ-58A very likely represents the low-end on the USAF's shadowy UCAV programs.

It is hoped that the XQ-58A will provide a low cost surveillance, strike, and electronic warfare support capability that can be operated independently, as a cooperative swarm, or as part of a so called 'loyal wingman' concept of operations a group of Q-58s would work under the command of a nearby manned combat aircraft. The stealthy drone, which supposedly has a range of well over 2,000 miles and is capable of carrying a pair of Small Diameter Bombs or electronic warfare and surveillance gear, is also capable of being launched using rocket boosters instead of relying on runways alone... I first heard about this concept in 1987 at Shrivenham and thought it was simply an awesome idea. Now that it's coming to fruition?

It does add some "colour" to the discussions about Warthogs and Armed Turboprops in the Ground Combat support roles.

I am a fan of the Navy's "Stingray" UAV. While it was designed to be a tanker for air to air refueling, the large internal volume means there is potential to use it in a multitude of other roles. Flying sensor platform, EW and ECM platform, "arsenal plane" carrying large numbers of bombs or missiles. In the future, there might even be the ability to mount a laser or railgun weapon on the platform, using the generous internal volume for the electronics needed to make it work.

These would still be "loyal wingmen", just larger and more versatile.

The US Air Force (USAF) has launched a competition to design the artificially intelligent software, called Skyborg, that would control its planned fleet of loyal wingman unmanned air vehicles (UAVs).

The service intends to grant indefinite delivery/indefinite quantity contracts worth $400 million per awardee to develop the software and related hardware, it says in a request for proposals released on 15 May. The USAF is looking for technical and cost proposals from companies by 15 June 2020 and intends to award multiple contracts, although it may award just one or none at all, based on the proposals received.

Skyborg would be artificially intelligent software used to control the flight path, weapons and sensors of large numbers of UAVs. Automating flight control, in particular via artificial intelligence, is seen as necessary to allow a single person, perhaps a backseat operator in a fighter, to command multiple UAVs at once [emphasis added].

In particular, the USAF wants Skyborg software and hardware to control “attritable” UAVs; aircraft with limited lifespans that are cheap enough to be produced in large numbers and could be affordably lost to combat attrition. Those UAVs could be used as loyal wingman aircraft alongside manned fighters, bombers and support aircraft.

The US Air Force Research Laboratory is leading development of these aircraft through its Low Cost Attritable Strike Demonstration programme. That effort has produced the Kratos Defense & Security Solutions XQ-58A Valkyrie, a UAV that has completed several demonstration flights. Boeing and the Royal Australian Air Force also have developed a loyal wingman called the Airpower Teaming System. That UAV’s first flight is expected later this year [emphasis added, more https://www.flightglobal.com/military-uavs/boeing-rolls-out-airpower-teaming-system-for-royal-australian-air-force/138219.article].

“The intent of Skyborg is to integrate an autonomy mission system core and suite of services, [which are to be] developed under a separate Skyborg System Design Agent programme, with multiple low-cost air vehicle systems, each designed to perform one or more mission types,” says the USAF. “The Skyborg core will be a best-of-breed combination of industry and government solutions.”

The initial contract will be used to develop the first integrated Skyborg system, the first to be used in a family of aircraft, says the service.

The UAVs are to have modular hardware and software payloads that use a common Skyborg autonomy mission system, and enable manned and unmanned teaming. The USAF wants to use the modularity to quickly plug and play software and hardware changes that would be needed to defeat new threats from near-peer militaries, such as China or Russia.

“Low-cost unmanned vehicles are envisioned to augment high-end manned systems through a series of next-generation UAVs that are affordable, effective, quickly designed and produced,” says the service. “In order to be truly affordable, acquisition, operation and maintenance costs would need to be correspondingly very low as compared to current tactical aircraft. There will also be a large need to offer a short development cycle so that variants could rapidly be procured as needed.”

Previously, the USAF has said it wanted a Skyborg-controlled UAV reaching early operational capability as soon as 2023. 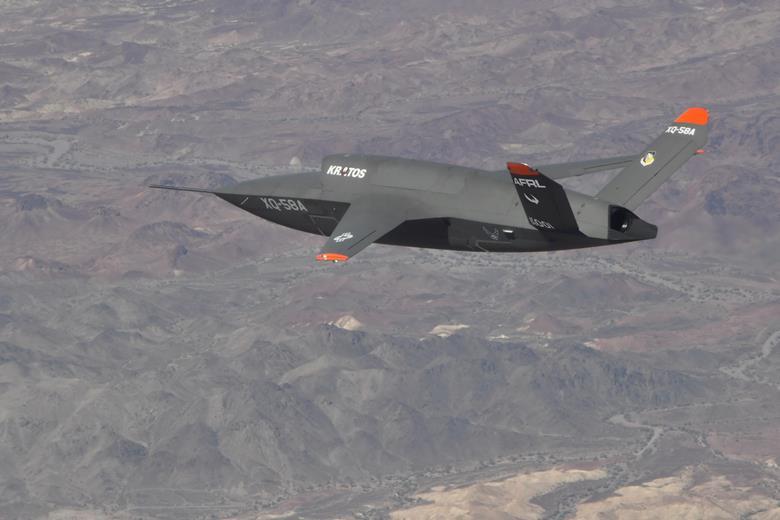 Is "borg" with AI really the best name?  :rofl:

No, no. Skynet would be much better...

SeaKingTacco said:
No, no. Skynet would be much better...
Click to expand...

That would fit nicely with my recent Cyberdine stock acquisition
You must log in or register to reply here.