The T27 Armored Car was a prototype armored car developed for the US Army in 1944 by the Studebaker Corporation. The T27 was an eight wheeled vehicle, with the first, second and fourth pairs of wheels being powered. With a crew of four, the T27 was armed with two .30 caliber machine guns and a 37 mm cannon. Powered by a Cadillac gasoline eight-cylinder engine, two T27's were produced in 1944.
The T27's production was cancelled in favor of a competing design by Chevrolet, the T28 Armored Car (aka M38 Wolfhound) 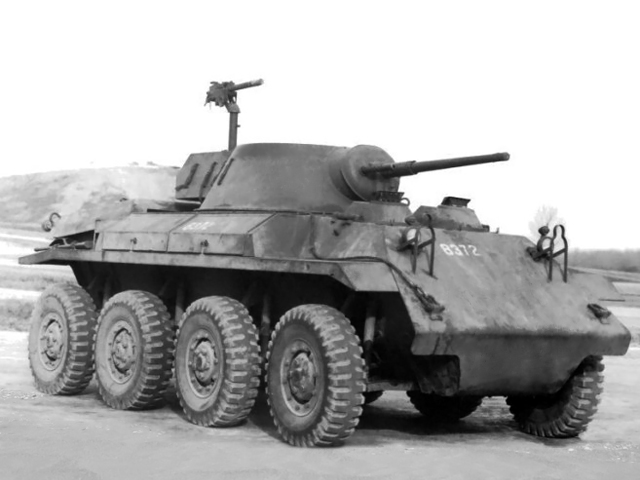 K. Made a point of having one ready before I answered

Something from Q-Branch.... ;D

"Long before the Tucker 48, Preston Tucker had partnered with the legendary Harry A. Miller to apply his ideas on automobile engineering to Indianapolis race cars and through that venture established himself within the automotive community; so he was certainly no unknown factor when, shortly before the United States became involved in World War II, he approached the U.S. Army with his prototype for a high-speed all-terrain combat car. According to Charles T. Pearson’s The Indomitable Tin Goose, Tucker envisioned the combat car a couple of years prior while recuperating from an appendectomy, and set up the Tucker Aviation Corporation in Ypsilanti, Michigan, to develop it. Along with designer Wesley Casson (and, according to some sources, Miller himself), Tucker specified a car with a 175hp, 478-cu.in. Packard V-12 driving the rear wheels and an innovative all-welded 9/16-inch armor plate system that reduced the car’s overall weight to a mere 10,750 pounds, or at least a couple thousand pounds lighter than contemporary armored car designs. It rode a 109-inch wheelbase, incorporated only one door at the rear of the car, and included a pair of .30-caliber machine guns protruding diagonally from each A-pillar, a .50-caliber machine gun pointed straight out from the windshield, and perhaps the Tucker’s most revolutionary innovation, a 37mm machine gun in the power-operated dome that rotated 360 degrees and elevated as much as 75 degrees. All glass was bulletproof, and Tucker claimed that it could be fitted with dual rear wheels, four-wheel drive, and even tracks. - See more at: http://blog.hemmings.com/index.php/2013/08/02/another-tucker-of-the-future-the-tucker-tiger-tank/#sthash.Sl1BIeRY.dpuf

I have never seen this variant before.

NFLD Sapper said:
The T27 was an eight wheeled vehicle, with the first, second and fourth pairs of wheels being powered.
Click to expand...

Quick question, why wouldn't you have all 4 sets of wheels powered?

cupper said:
Quick question, why wouldn't you have all 4 sets of wheels powered?
Click to expand...

No idea, ask the Studebaker Corporation....LOL!

Are you sure it's not a Ram ARVE?  The stepped glacis and the hatch in the front of the glacis and on the side are Ram features.

AmmoTech90 said:
Are you sure it's not a Ram ARVE?  The stepped glacis and the hatch in the front of the glacis and on the side are Ram features.
Click to expand...

This web page would agree:  http://www.ramtank.ca/ram_mk2_5.htm

The Sherman ARV II does have a different glacis too.

you are right! The page I was looking at misidentified the vehicle!

At a guess, the space needed for the differential on that wheel set intruded into something that the designers thought was more important. Designing multi axle vehicles is something of an art form: I am trying to find a good photo of the undercarriage of the Spähpanzer 2 Luchs; designed by mad German engineers to have 8X8 independent suspention, all wheel drive and all wheel steering. Maintainers must have loved that!

Edit to add: found the undercarriage picture: not quite what I was expecting...

I don't (can't) play this game as I do not have a clue... but I do like looking at the pics and trying to Google search some....
But I found one that I would like to post if I may.
For your pleasure:

That is a Carro Armato P 40

Now I know why I can't play this game. My info says Carro Pesante P26/40 production started by Ansaldo.
So your answer sounds right.

Thx
ME
You must log in or register to reply here.

The U.S. Marines’ Amphibious Combat Vehicle Is a Beast