Nichelle Nichols who is best known for her role as Lt Uhura in the original Star Trek has passed away at 89.​

Nichelle Nichols, who played the communications officer on the Starship Enterprise on “Star Trek” and famously participated in what was thought to be the first interracial kiss on television, has died.

Nichols died of heart failure Saturday night at a hospital in Silver City, N.M., a friend of the family handling media inquiries for Nichols’ son confirmed Sunday to the Los Angeles Times. She was 89.

Nichols suffered a stroke at her Woodland Hills home in 2015 and was struggling with dementia. She had been in a years-long conservatorship battle that pitted the son, Kyle Johnson, against a former manager and a close friend. Last year Johnson moved Nichols to New Mexico, citing the need to protect his mother from what he called exploitation by the manager and others.
Nichols gained fame as the beautiful, composed, immensely competent Lt. Uhura on three seasons of “Star Trek” on TV and in six “Star Trek” movies. A Black American cast as a master of 23rd century intergalactic technology, she had a role that defied the typical portrayal of Black women as domestics or entertainers. When she contemplated leaving the show for a Broadway play after its first season, she was dissuaded by none other than the Rev. Martin Luther King Jr.

When they met at an NAACP fundraising event in Beverly Hills, King was appalled when she spoke of quitting, according to Nichols’ 2010 reminiscence on the Archive of American Television.

“The world sees us for the first time as we should be seen,” King told her. “Gene Roddenberry [‘Star Trek’s’ creator] has opened a door. If you leave, that door can be closed. Your role is not a Black role and not a female role — he can fill it with anything, including an alien.”

“I could say nothing,” she recalled. “I just stood there, realizing that every word he said was the truth.”

“He told me that it was the only show that he and his wife, Coretta, would allow their little children to stay up and watch,” Nichols recounted to CNN years later. More important, the Nobel Prize winner told Nichols that she was breaking important new ground for Black Americans and had to keep doing it.
“For the first time,” King told her, “the world sees us as we should be seen. This is what we’re marching for.


“Besides,” said King, who confessed to being a huge “Star Trek” fan, “you’re the fourth in command — you’re the head communications officer.”

“He took out my resignation letter, which was torn into a hundred pieces, and handed me the pile. I said, ‘Thank you, Gene.’ ”
Nichols came to embrace her role and appeared at “Star Trek” events throughout her life. She became an eloquent advocate for the U.S. space program and led a successful drive to recruit women and minorities into astronaut training.

“My heart is heavy, my eyes shining like the stars you now rest among, my dearest friend,” her “Star Trek” co-star George Takei wrote Sunday on Twitter, calling Nichols an incomparable trailblazer.

Elegant, assertive and capable of rigging up a subspace bypass circuit in practically no time at all, Uhura inspired a generation of Black women. Comedian Whoopi Goldberg, on first seeing Nichols when she was about 9, remembered running through the house yelling, “Everybody, come quick, come quick — there’s a Black lady on television and she ain’t no maid!”

After only three seasons, “Star Trek” was canceled in 1969. In its afterlife, it became far more popular, sparking additional TV series and more than a dozen feature films.

Nichols appeared in 66 episodes of the original “Star Trek.” She was popular fixture at “Star Trek” conventions, where fans asked her about one plot point more than any others: the long clinch between Uhura and Capt. James Kirk that was widely thought to be TV’s first interracial kiss.

The first thing people want to talk about is the first interracial kiss and what it did for them.
Click to expand...

“The first thing people want to talk about is the first interracial kiss and what it did for them,” she said in a 2010 interview for the Archive of American Television. “And they thought of the world differently — they thought of people differently.”
First aired on Nov. 22, 1968, the episode called “Plato’s Stepchildren” featured a race of aliens who worshiped the earthly philosopher Plato. In their study of humanity, they wanted to observe human intimacy — and telekinetically forced Uhura and Kirk, played by William Shatner, to kiss.

By the standards of the day, it was a potentially explosive scene. Just one year earlier, the Supreme Court struck down state bans on interracial marriage. “Star Trek” producers were so worried about public reaction that they tried to film one version of the scene with the kiss and another with only an embrace, for use on stations in the South. However, the kiss-less approach was thwarted when, in take after take, Nichols and Shatner deliberately flubbed their lines.

In her autobiography, “Beyond Uhura,” Nichols recalled Shatner hamming it up strategically: “Bill shook me and hissed menacingly in his best ham-fisted Kirkian staccato delivery, ‘I! WON’T! KISS! YOU! I! WON’T! KISS! YOU!’ It was absolutely awful, and we were hysterical and ecstatic.”

Finally, a seemingly usable take was filmed and everyone went home for the evening. Only the next day did producers realize that Shatner had crossed his eyes as the camera caught his face during the non-kiss. At that point, executives abandoned their Southern strategy.

“I guess they figured we were going to be canceled in a few months anyway,” Nichols said. “And so the kiss stayed.”

The anticipated backlash never arose. The scene became more famous as time went on, even though TV historians point to a number of previous, less heralded, interracial TV kisses, including a peck on the cheek from Sammy Davis Jr. to Nancy Sinatra a few months earlier.

Born into a large family in Robbins, Ill., on Dec. 28, 1932, Grace Dell Nichols adopted the name Nichelle as a teenager. Her father, Samuel Nichols, served as mayor and chief magistrate of the small Chicago suburb, which was founded in 1917 as a haven for Black American families.

A student of ballet and Afro-Cuban dancing, young Nichelle appeared in a revue at Chicago’s Sherman House hotel, where she caught the eye of the renowned Duke Ellington. As a teenager, she sang and danced with Ellington’s touring company and later performed with jazz great Lionel Hampton’s orchestra.

In the 1950s, Nichols appeared at nightclubs throughout the U.S. and Canada. She did an opening act for comedian Redd Foxx and danced in Otto Preminger’s screen version of “Porgy and Bess” in 1959. In 1963, she was cast in an episode of “The Lieutenant,” a TV show written by Gene Roddenberry, who later created “Star Trek.” The two had a fleeting romance that turned into a longtime friendship; in 1966, he asked her to join the crew of the Starship Enterprise.

They agreed to name her character Uhura — a variant of Uhuru, a Swahili word for freedom.

After one season, Nichols was fed up. Her character didn’t seem all that important and her lines were sparse. Besides, her heart lay in musical comedies and she yearned for Broadway.


She stuck it out, though, through the very last episode. “When you have a man like Martin Luther King say you can’t leave a show, it’s daunting,” she told USA Today in 1994. “It humbled my heart and I couldn’t leave.”

The year after their chance meeting at the NAACP banquet, Nichols sang at King’s funeral.

After the original “Star Trek” ended, Nichols embraced her role at “Star Trek” events. At a Trek convention in Chicago, a talk by NASA scientist Jesco von Puttkamer inspired her to embrace NASA as well.

“For someone who used to think that the only civilian benefits of the space program were Teflon and Tang, it’s funny that I became a NASA missionary,” she told the Chicago Tribune years later.

A recruitment drive led by Nichols in 1977 drew applications from more than 2,600 women and minority astronaut hopefuls. They included Sally Ride, the first American woman in space; and three of the astronauts who died in the 1986 Challenger space shuttle explosion: Judith Resnik, Ronald McNair and Ellison Onizuka.

Nichols married tap dancer Foster Johnson in 1951 and songwriter Duke Mondy in 1968. Both marriages ended in divorce. A brother, Thomas Nichols, died in the 1997 mass suicide of the Heaven’s Gate cult at Rancho Santa Fe, near San Diego. Survivors include son Kyle, whose announcement of Nichols’ death likened his mother’s light to “the ancient galaxies now being seen for the first time” — something from which present and future generations could “enjoy, learn from, and draw inspiration.”

But Nichols’ most lasting legacy may be in the memories of people like Mae C. Jemison, an astronaut who became a close friend.
In 1992, Jemison boarded the space shuttle Endeavour and became the first Black American woman in space. In a tribute to the woman who had inspired her, Jemison started each shift of her eight-day trip with the announcement that had become Nichols’ signature line as the Enterprise blazed past strange new worlds:
“Hailing frequencies open!” 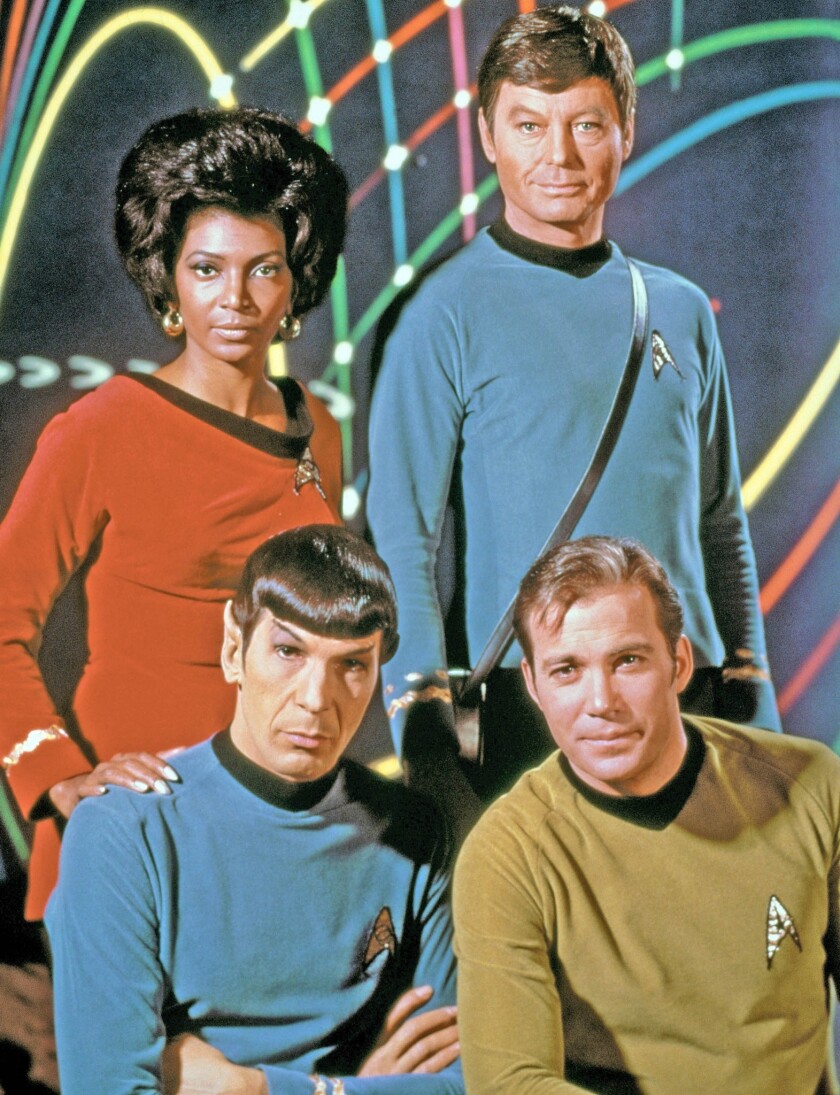 She lived just long enough to have her character's first name legitimately established in canon.

And before joining Star Fleet, she had occasion to entertain at the Fleet School, Naden.

From the January 1961 issue of Crowsnest magazine. 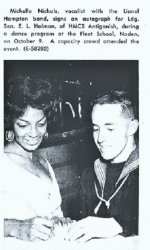 Damn! That’s a loss. Her appearing, as a black woman, in a leading position on a major tv show was groundbreaking.

Unlike the man she kissed in 1968, I've heard nothing but good things about her. May her family rejoice in their memories of a truly wonderful person.

Fair winds and following seas, Ma'am. Rest in Peace; your work is all done here.
D 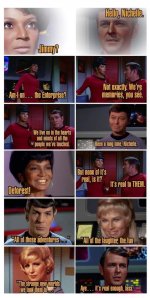 As red shirts go, she outlasted them all.

Oldgateboatdriver said:
As red shirts go, she outlsated them all.

Origin of Covid — Following the Clues