I believe this is regarding the updated system, the old system could lock onto 32 targets with 16 in terminal phase, notice now it is only limited by the number of missiles in the launchers.

In this article we see reference to the APAR Block II and the Canadian CSC program.  I realize we don't have a war handy to prove this system against multiple incoming threats, and the system is still evolving which will be on a continuous basis, but what system has proved itself against multiple threats?

I posted this in the other thread, but this is the type of overall system we are trying to achieve, where one ship with an excellent system can link up with other ships and direct the fire of their missiles, can be in any battle group.

So neither FELEX or the HCM follow on projects upgrade the CPF the Mk 48 Mod 0 Launcher, even though they opted for the ESSM? I thought one of the primary benefits of the ESSM (other than it is by far a better missile) was that the modifications to the launcher could allow for 4 x ESSM in the same space as 1 x RIM 7 missile.
A

Cloud Cover said:
So neither FELEX or the HCM follow on projects upgrade the CPF the Mk 48 Mod 0 Launcher, even though they opted for the ESSM? I thought one of the primary benefits of the ESSM (other than it is by far a better missile) was that the modifications to the launcher could allow for 4 x ESSM in the same space as 1 x RIM 7 missile.
Click to expand...

From what I saw from the Mk 48 GMVLS info was that two ESSM's can take the place of one sea sparrow.

Thumper81 said:
From what I saw from the Mk 48 GMVLS info was that two ESSM's can take the place of one sea sparrow.
Click to expand...

Yes, but we didn't get that upgrade. They just packed 1 ESSM into the same launcher as the SSM (Mk48 GMVLS Mk0). What they do with all the extra space around the missile, I don't know.. So, potential for 32 PD missiles, but in reality only 16.

Just enough to make you "feel" like you're safe...
B

32 ESSM's per CPF would have been a nice upgrade, should have happened.

This link is to an article that has a video containing a segment in which HMCS Montreal fires a couple of ESSM's, just if anyone is interested.

This may be the future of taking out incoming missiles, as soon as they have systems with a power ratings over 100kW it will start to get interesting, and more applicable to warships.

The request for proposals for Canada’s new fleet of warships will be out within weeks.

Lisa Campbell, Assistant Deputy Minister of Defence and Marine Procurement at Public Services and Procurement Canada confirmed to the The Chronicle Herald Wednesday that Irving Shipbuilding — the prime contractor for the combat package of the National Shipbuilding Strategy and builder of the new Canadian Surface Combatants — will issue the final combined request for proposal (RFP) for a warship design and combat systems before the end of the summer.

This comes following what is expected to be final industry engagement meetings that took place in Halifax this week.

At the meeting, the 12 prequalified firms, or shortlisted request for proposal respondents — among them industry giants like Lockheed Martin, BAE Systems, ThyssenKrupp, Navantia and DCNS — were given the final draft of the massive, 1,500 plus page proposal documents ahead of receiving the final version likely sometime in September. More than 80 suppliers have also been involved in a number of industry engagement meetings that haven't taken place in the last year.

Lessons learned from the F35 program.

One lesson to takeaway is leadership. The program’s first 18 years saw nine directors. The military’s habit of swapping out program managers every three years to accommodate officer career paths just doesn’t work with a long, complex acquisition process, he added.

After the Defense Department recognized this, it installed Lt. Gen. Christopher Bogdan as the director, and has kept him in the position.

“The single biggest requirement [for a program like the F-35] becomes competent, long-tenured leadership,” Venable wrote.
Click to expand...

yes saw that yesterday, looking good, even though I live not far from them, I have yet to see a lift on the crane. (My daughters class got to name it)
C

A look at Davie's changing fortunes:


LÉVIS — Four years ago, most people wouldn’t have paid a plug nickel for the Davie shipyard.

Awash in red ink, manned by a skeleton crew and adrift after a failed and controversial bid to land some of the $35 billion in federal contracts awarded under the National Shipbuilding Procurement Strategy, the once-proud yard appeared headed for the business-world equivalent of Davy Jones’s Locker.

But a troika of brash British entrepreneurs saw opportunity in the pending financial shipwreck on the east end of this small city on the south shore of the St-Lawrence River, directly opposite Quebec City.

it looks like some trial balloons are being floated (via Michael den Tandt of Postmedia)--plus some wild-assed speculation on my own:

it looks like some trial balloons are being floated (via Michael den Tandt of Postmedia)--plus some wild-assed speculation on my own:

Jeez, don't you just hate it when you have to tell folks you were right all along?  ;D

So lets suppose that Aker (who not only designed the Diefenbaker PI but also the AOPS's currently being built by Irving - and who have been known on the west coast as Aker, Kvaerner, STX Marine and now Vard and are Tier 1 suppliers of Design and Engineering to Seaspan and involved in supplying the OFSVs and OOSVs - and who designed CCGV Leonard J. Cowley) actually got to build the vessels that they designed.  Would that be such a bad thing?

And tell me again why Irving got the AOPSs when all the preliminary work had been done on the West Coast?

Aker also built the Svalbard - the original AOPS - and builds OPVs for the Norwegian Coast Guard - like the Harstad.

So let's suppose you were planning on exporting oil and gas off of a rocky green coast defined by lots of fjords - and you wanted to build a fleet of tenders to keep the tankers safe and the waters clean - and you wanted to ensure the air was kept as clean as possible by keeping carbon emissions to a minimum through the use of natural gas as a fuel - who would you call?

BC - you get to sell your natural gas
We, the feds, will build you a fleet of tenders manned by the Coast Guard (with new native crews?)
You, BC will then accede to AB oil being shipped from your ports - from which you will collect revenue.
AB, you get tidewater
BC, you also get to sell "clean" electricity to AB to reduce their carbon cost of extraction.
J

Building offshore is very unlikely (except perhaps in the way that Australia does - part offshore and finishing work at home).  Building at Davie - far more likely.

Which then opens up the West Coast for building Aker designs.

Norway is to fast-track the acquisition of three new coastguard vessels to replace the current Nordkapp-class [57mm gun https://en.wikipedia.org/wiki/Nordkapp-class_offshore_patrol_vessel ],
the country's prime minister has announced.

Construction will start in 2018, with delivery between 2021 and 2023. The ships, which will be built simultaneously, are planned to feature ice-breaking capabilities, an increased sailing range, and helicopter hangars.

While the new class's final specifications are yet to be determined, Birgitte Frisch of Norway's Ministry of Defence told IHS Jane's on 4 October that operational requirements include "the necessary stability to carry [out] boat and helicopter operations in Arctic waters".

They will have an additional wartime role to participate in naval and support operations, she said.
http://www.janes.com/article/64360/norway-to-build-three-arctic-patrol-vessels
Click to expand...

Around half the size of the A/OPS?  But still:

a good reminder on going to light http://gcaptain.com/photos-show-catastrophic-damage-to-hsv-swift-following-missile-attack/?utm_campaign=Roost&utm_source=Roost&utm_medium=push 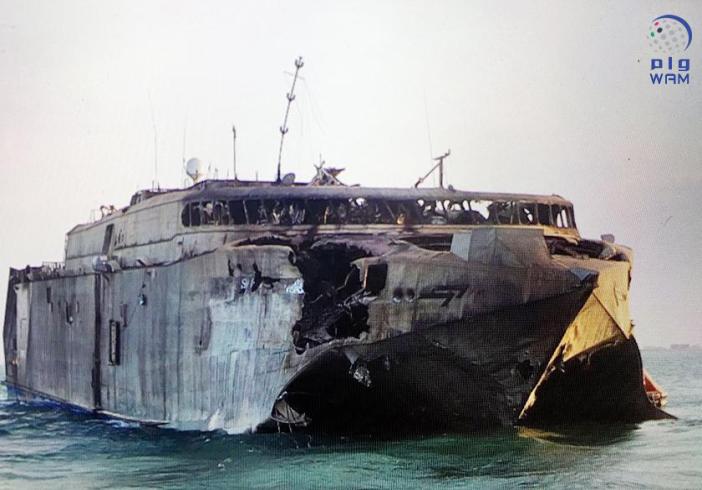 Another reason why building naval ships to commercial standards is stupid, too.
You must log in or register to reply here.