Modern corvettes are a trap. All the cost of a frigate with none of the survivability or range. Canada doesn't need corvettes. Canada needs OPV's and proper warships. The in-betweens have no role in our context.

Kirkhill said:
I think that ship may have sailed already.

I think the key word is "stationed". Transit seems to be permitted.
Click to expand...

With the Braunschweig/Sa'ar 6 and Pohjanma, nobody is really sure how to classify them, with "corvette" being more of a placeholder than a proper designation. The Finnish, German and Israeli navies' descriptions and intended missions are more in-line with OPVs than standard warships.

Yes they have. My original comment was largely tongue-in-cheek with the image posting Thunder Bay as part of an AOPS "patrol zone".
S

Colin Parkinson said:
People/Politicians will ask why we need a baby AOP's. The replacement is going to have to be distinct from the AOP's and fill other roles.

So far we all seem to agree on:

Range: must be ocean capable and cross the Atlantic, Sea State?
Size: No smaller than MCDV, but no bigger than 2500DWT
Roles: Mine hunting is a critical function the RCN needs to maintian and improve
Speed: Faster than the current MCDV
Ice: Ice Strengthened
Click to expand...

Is RAS capability a must in this list of requirements, I wonder?
M

Anything can be a minesweeper, once.

Swampbuggy said:
Is RAS capability a must in this list of requirements, I wonder?
Click to expand...

Likely not a deal breaker if the range is good enough. In order to keep crew numbers down a light jackstay ability is probably good enough.

Does the RCN still do astern fuelling?

Short answer is: no.

Last time we did this was in the mid-90's when one of the Anticosti class minesweeping auxiliaries was fitted to refuel astern and practiced with the other ship in class. This was done as proof of concept to demonstrate that : (1) it could still be done if need be; and, (2) it's not that complicated.

Gear was stowed away after proof of concept, and I have no idea what has been done with it (though, this being the CAF, it is probably in a dark corner of a supply depot, labelled "war stock only - do not issue in peacetime" and so will remain there forever with no one remembering what its for).

MCDV's tried it once. Immediately discarded as everyone was terrified through the whole trial (or so I heard). But it was better to just tie the MCDV up beside the ship it was fueling from and drop the fuel lines down to the sweep deck. Old school destroyer fueling from a battleship style...

Interesting it was one of the more common ways to refuel escorts back in WWII, but they were less concerned about spillage back then! Considering most of the roles of a MCDV, finding a sheltered bay to come alongside to refuel from an AOP/AOR/Barge would not be difficult.
S

I believe I saw a video once about a Northern deployment where GOOSE BAY, I believe, was refuelled by PIERRE RADISSON in that way.
P

One of the frigates, Montreal I believe, did an astern RAS a few years ago. IIRC it was because they had an engineering casualty which would have made a standard RAS risky.

Colin Parkinson said:
Interesting it was one of the more common ways to refuel escorts back in WWII, but they were less concerned about spillage back then! Considering most of the roles of a MCDV, finding a sheltered bay to come alongside to refuel from an AOP/AOR/Barge would not be difficult.
Click to expand...

Actually, Colin, there were two reasons why it was the most common form of refuelling in the WWII convoys:

(1) They didn't have the self-tensioning hydraulic systems we now use for refuelling at sea in those days, so refuelling "side-by-side" was a complex operation that required cranes and extensive wires and tackles on the supplying ship. Those were only found on cruisers, battleships and aircraft carriers of the time, so they could refuel their escorting destroyers. Very few if any such ships sailed as escort to convoys, so side-by-side RAS was not an option - especially since no cargo ship ever practiced such evolution.

(2) The method in use for side-by-side refuelling required extremely precise and lengthy station keeping by the receiving ship. Such precision was near impossible in the Atlantic for small ships like the corvettes and frigates that were tossed around like corks.

Those are the reason that led, yes, led, because they invented the technique during WWII as a result of the limitations above, to the said development of astern refuelling.
Last edited: 3 Jul 2021

Colin Parkinson said:
Does the RCN still do astern fuelling?
Click to expand...

Swampbuggy said:
I believe I saw a video once about a Northern deployment where GOOSE BAY, I believe, was refuelled by PIERRE RADISSON in that way.
Click to expand...

It was indeed GBY - I was the Officer of the Watch! They've done it on subsequent northern deployments. Not much to it at all.

Monsoon said:
It was indeed GBY - I was the Officer of the Watch! They've done it on subsequent northern deployments. Not much to it at all.
Click to expand...

I did it a bunch of times as well but in the past the CCG doesn't like the hassle of giving us fuel and often its hard to make an RV when the CCG is looking after commercial traffic and are constantly moving.
In the arctic I fueled with another MCDV, CCG as mentioned, at Thule and of course in NUUK which is the preferred method. I also came back from an Arctic trip with 12% fuel because we couldn't get fuel. I doubt if we'll ever get it from an AOPS as they have a setup for the Kingston Class at the Arctic fueling depot which hopefully be operational next year.
For WC ships the lack of refueling points means Dutch harbor, and getting it from a barge on the Fraser and by CCG. Even getting fuel in Churchill has been difficult over the years.
As for being nothing to it, well that's all fine and dandy until you spill and I assure you the consequences for that are severe. All fueling evolutions are high risk in the Arctic.
Last edited: 11 Jul 2021

Yes, we embarked a fuel boom I recall. The MARPOL special area requirements were a challenge - but refuelling alongside was not.

Monsoon said:
Yes, we embarked a fuel boom I recall. The MARPOL special area requirements were a challenge - but refuelling alongside was not.
Click to expand...

All ships going to the Arctic have to embark a fuel boom and interestingly enough now each Kingston Class has to embark fueling hose in case they have to share fuel between ships as one year the ships were short of fuel. The evolution itself is not challenging but all fueling is inherently high risk and extra precautions such as extra absorbent pads, extra socks should be used in case of minor spill in the Arctic.

The MARPOL requirements in the Arctic is actually not that bad, basically zero discharge of pulped and non pulped waste. GW and treated BW allowed. We have stricter requirements for a Great Lakes Deployment.

I can see our MCDV or AOP's working with this ship. 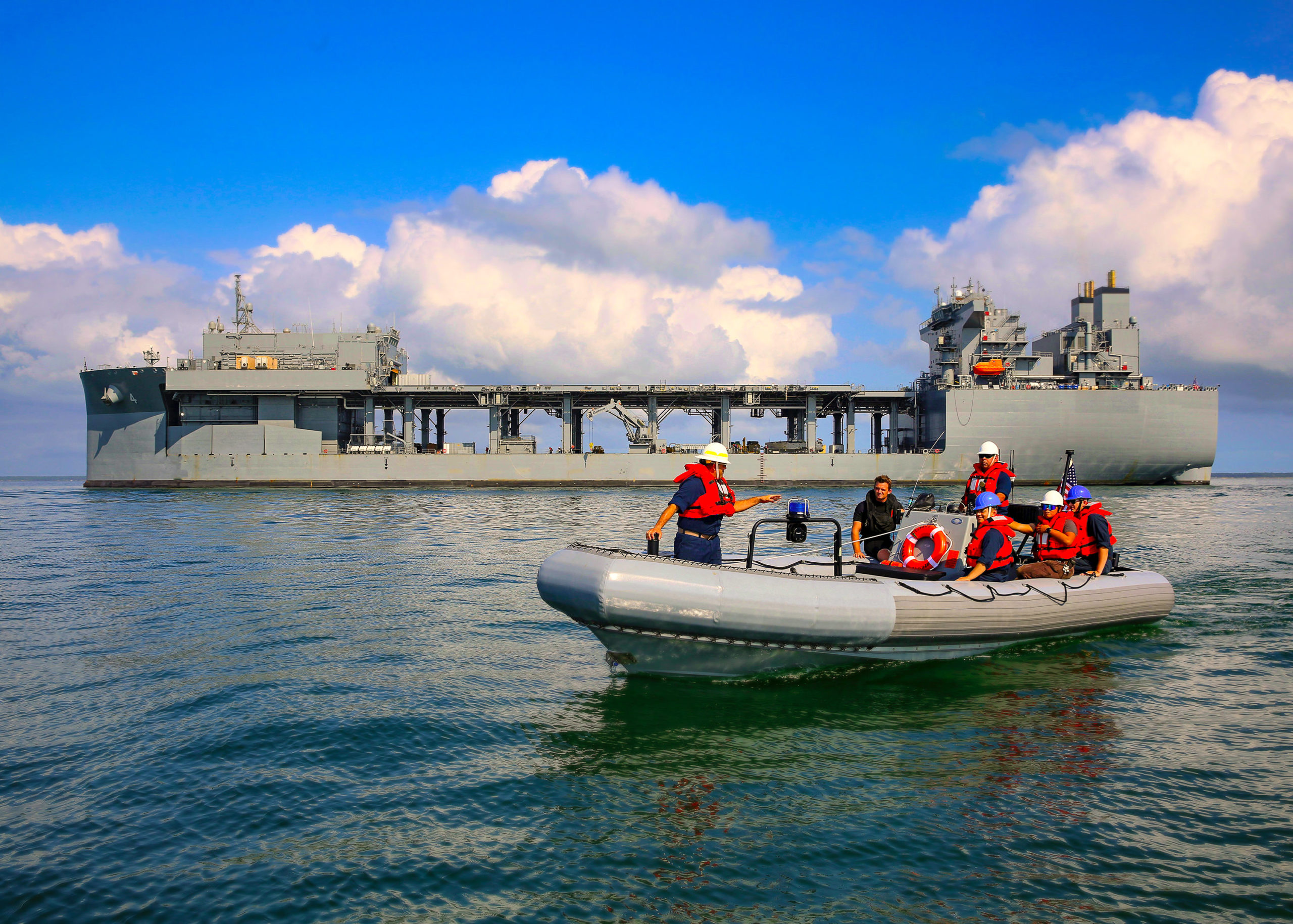 Navy Sea Base Arrives In Nigeria For Anti-Piracy Push

By Tope Alake (Bloomberg) USS Hershel “Woody” Williams, the first ship permanently assigned to Africa, arrived in Nigeria’s commercial capital city of Lagos on Saturday as part of the U.S....

gcaptain.com
You must log in or register to reply here.

P
Re-Enlist with a 5F release

What to Do With Contrarians?