One more time.... deaths from the previous heatwave upped to 808 now:

The federal meteorological agency’s bulletin at 5:26 pm today states a strengthening ridge of high pressure will bring rising temperatures across the South Coast later this week.

“The time frame with the hottest weather will be from Thursday to Saturday. The highest temperatures are expected to be in the Fraser Valley, Sea to Sky region, and inland Vancouver Island,” reads the bulletin.

Within Metro Vancouver, daytime high temperatures later this week will rise to 3°C to 5°C higher compared to today and Tuesday — reaching 26°C on Thursday, 27°C on Friday, and 25°C on Saturday for the weather station near water at Vancouver International Airport. For areas that are further inland, away from water (such as Burnaby, Coquitlam, Port Coquitlam, eastern Surrey, and Langley), temperatures will reach the low 30s.
Overnight lows will also rise into the mid to high teens.

Following the historic deadly heat wave earlier this summer, the public is urged to take precautions by staying cool and hydrated, and be extra vigilant for symptoms of heat illness, which include swelling, rash, nausea, vomiting, dizziness, tiredness, muscle cramps, heavy sweating, and cold, pale skin.

A total of 808 deaths were reported in BC between June 25 and July 1, 2021, with the vast majority attributed to heat-related causes. For context, the number of deaths reported in the same period in the province last year was 232. During this period, temperatures consecutively broke all-time records, reaching as high as the low 40s. 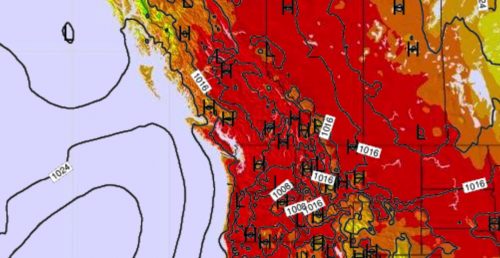 A special weather statement has been issued by Environment Canada for a heat wave in Metro Vancouver over the latter half of this week.

Upbeat ad filmed in fire-ravaged Lytton, B.C., called 'a slap in the face' to residents​


Lytton residents say the commercial for ATCO is in poor taste. (ATCO/YouTube)

Residents of Lytton, B.C., say they feel exploited by a new commercial that features their community, which was almost completely destroyed by a wildfire last summer.

A commercial for ATCO Group, a Calgary-based structures and logistics company, shows two young kids walking through a burned-out town while hauling a seedling tree in a wagon to a cover version of Katrina and the Waves' 1985 hit Walking on Sunshine.

The young girls pass a sign that reads "School reopens today" and try in vain to dig a hole. An ATCO worker stops what he's doing and helps the young girls plant the seedling.

The commercial ends with the tagline, "For over 75 years, we've been where the world needs us."

But the company admits the story of a school reopening is a work of fiction. In reality, up to 90 per cent of buildings and homes in the community were destroyed, and residents unable to return are frustrated by the slow pace of rebuilding — and, for some, the commercial is rubbing salt into those wounds.

Dumbasses…
You must log in or register to reply here.