Canada and the new US Army Multi-Domain Transformation 2021

The Chief of the US Army has published a new paper on how the US Army will meet the challenges of the future through a Multi-domain Transformation program both during competition and during conflict.

How will this effect Canada?

How should Canada respond?

FJAG said:
How will this effect Canada?

How should Canada respond?

After a quick scan of more buzzwords and organizational speak than found in some MBA programmes, I did a word search for a few select items - Canada (zero), NATO (one) and Arctic (one) - so while the paper does discuss alliances and partnerships, it is not a foreign policy document. My initial impression is that a prime purpose of this Army-centric document is to position "Army leadership" vice "joint leadership" as the prime mover in the future. I came particularly to this opinion with the one reference to NATO.

The Army is uniquely qualified to maintain and expand this vital network. Our
relationship with Allies and partners is an unmatched strategic and competitive advantage,
allowing us to out-think and out-position our competitors. Partner militaries, including their
senior leaders, are predominately land force-centric. In the Indo-Pacific, 24 of 29 armed forces
chiefs are army officers, and of the 30 NATO member states, 22 have armed forces chiefs from
their respective armies. Through this professional kinship, the U.S. Army can play an outsized
role in supporting U.S. inter-agency objectives in a whole-of-government approach.
Click to expand...

As to a specific Canadian involvement, perhaps the one "Arctic" reference may be telling.

. . . The Army plans to build five MDTFs: two aligned to the Indo-Pacific; one aligned to Europe; one positioned in the Arctic and oriented on multiple threats; and the final MDTF aligned for global response. MDTF 1, aligned to the IndoPacific, will be the centerpiece of Project Convergence 2021.
Click to expand...

Canada wrote a Pan Domain Force Employment Concept 2 years ago that was ahead of all of our Allies. It has not been released except as a Draft for l
Limited Discussion

I've had a chance to read this now and think it actually has some good ideas in it.

The document does a good job of defining the problem and sets up a clear high level structure to create regionally targeted forces to support the Combatant Commanders who already have charge of the region as well as developing some key homeland enablers to carry the fight forward as and when needed.

The "inside" and "outside" forces concept shows a clear way of securing a region from contest, through crisis to conflict. The regionally assigned Multi-domain Task Force and it's organic units demonstrate a new force structure capable of securing a region, or at least securing a foothold in a region, against fait accompli situations. Its All-Domain Operations Center is a critical element for proper all-domain operations through the entire spectrum. The same way, the regionally assigned Security Force Assistance Brigades assist a unified combatant commander with establishing trust with the regional allies. These provide ongoing in-theatre enablers through.

Similarly, assigning a corps and specific divisions amongst the "outside" forces to be trained for specific regional missions, goes a long way to increasing readiness. The newly re-activated 3rd Corps forward CP in Poland is a good example of this.

Just as importantly, the section on sustainment from rapid power projection, to Mobilization Force Generation Installations, to Army Prepositioned Stocks, to its force reconstruction and modernization and re-equipment programs to industrial base modernization all point to a comprehensive plan to hold and secure and react to the continuum of threats facing the US for the future.

This paper lays out a clearly understandable road-map for where the US Army wants to go.

FJAG said:
This paper lays out a clearly understandable road-map for where the US Army wants to go.

And becasue they think they can do it alone, mainly, they will fail because power projection is largely navy centred ...

daftandbarmy said:
And becasue they think they can do it alone, mainly, they will fail because power projection is largely navy centred ...
Click to expand...

There are clearly elements in the paper which deal with these issues. For example:

The Army and the Joint Force’s foundation of success in Assured Rapid Power Projection is in the resiliency of Army installations with a special emphasis on Power Projection Platforms (PPPs), Mobilization Force Generation Installations (MFGIs), and Military Ocean Terminals (MOTs), as well as supporting commercial facilities, to continue to operate in a contested and degraded environment.
Click to expand...

The whole concept of the "outside force" encompasses a number of situations, from prepositioned configured for combat equipment and stocks (which would require a Reforgerish fly-on (such as the current brigades prepositioned in Poland) as well as multi-channel reinforcement and sustainment through air and sea power. Interestingly, 5 SFAB is targeted to the Indo-Pacific Command as is one of the Army Prepositioned Stocks:

APS is evolving into more than power projection in crisis and contingency: it serves as a tool in itself to build relationships during competition. For instance, APS in the Indo-Pacific (APS-4) is breaking ground with our emerging regional partners. These facilities bolster relations with local and national host nation governments, and enhance the speed for forces arriving in crisis or conflict.
Click to expand...

While I expect much of that deals with Korea, the "emerging regional partners" portion more probably deals with India.

I doubt that the US Army ever had any misconceptions about its need for Navy and Air Force support to get to and stay in the fight. While the US Navy has been reducing the size of its transport fleet, it is nonetheless still sizeable. Similarly the USAF has a sizeable cargo transport capability as well as several hundred aircraft committed for international travel through the Civil Air Reserve Fleet.

A big problem for the US Army (and USMC) in the Western Pacific:

“Today, there is probably not one of our regional partners in the first island chain that would be willing to base Army -- or any other service – long-range strike missiles in their country,” retired Lt. Gen. Thomas Spoehr says.​

The Army hasn’t yet figured out which countries would actually host the new long-range missiles it’s developing, an Army strategist acknowledged today. Experts point out that just hosting US weapons with the potential to threaten China may be a risky move for any nation in the region.

While not an immediate crisis for the service, since prototype missiles don’t enter service until 2023, it’s still a distinct problem for the Army’s new strategy of operating as an “inside force,” one able to deter China from forward positions in the so-called First Island Chain. That line runs from Southeast Asia through the Philippines to Japan and Korea.

The closest US territory to China is in the Second Island Chain, specifically Guam, Saipan, and the other Mariana Islands — almost 2,000 miles from the Chinese mainland. While exact ranges are highly classified, of the multiple long-range missiles the Army is exploring, it’s probable that only the Long-Range Hypersonic Weapon (LRHW) could hit China from Guam.

For any missile less long-ranged (and less expensive), the Army would need to persuade a friendly nation to accept American launchers on their soil, at least as part of a temporary “rotational” presence. While the service is drawing up plans and discussing its new Pacific strategy with allies and partners, at least in general terms, any specific agreement on hosting missiles is a long way off – if it ever comes.

“In terms of the Indo-Pacific, where we would posture these capabilities…is about working with allies and partners,” said Col. Jason Charland, a senior strategist in the Army’s Pentagon headquarters. “We have objectives based on the range of our capabilities, [and] we’ve got a plan that we’re looking at right now –a calibrated force posture plan in the Indo-Pacific.” (Emphasis ours).

“Ideally, what we’re looking at is a rotational presence,” he noted, where units come and go from time to time, rather than permanent bases: “We’re not talking about permanent presence necessarily.”.. 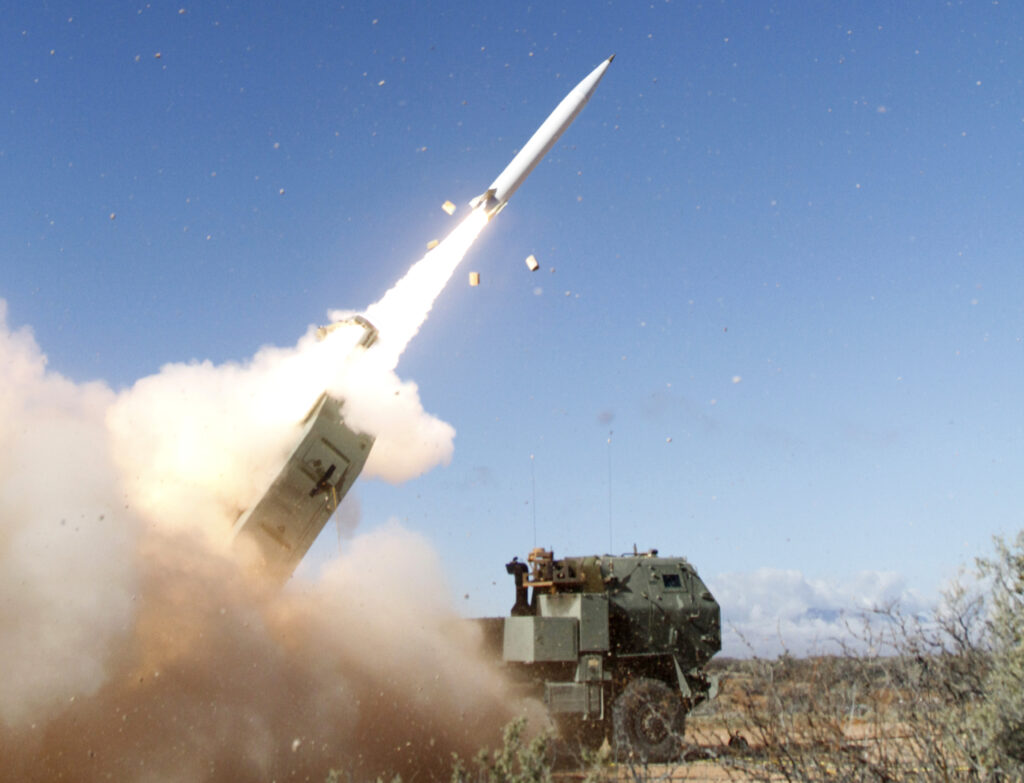 ‘$64K Question’: Where In Pacific Do Army Missiles Go?

“Today, there is probably not one of our regional partners in the first island chain that would be willing to base Army -- or any other service – long-range strike missiles in their country,” retired Lt. Gen. Thomas Spoehr says.

Some wishful thinking, I'd say.

MarkOttawa said:
A big problem for the US Army (and USMC) in the Western Pacific:

Some wishful thinking, I'd say.

Which is why the Navy will continue to be the 'missile slingers' of choice. Politically and strategically much less contentious, and far more flexible tactically.

Whenever I think of the difference between Navy firepower and that of the Army I remind myself that during the Napoleonic Wars, one first-rate ship of the line carried the firepower of 100+ guns (or appx 16 field batteries) a large number of which were significantly heavier and more powerful than what was typically in the field artillery and would more properly categorized as siege artillery. Wellington's entire army at Waterloo mustered the equivalent artillery firepower of roughly 1.5 first-raters.

That said, there is a role for the "inside force" army to create safe (or partially secure) spaces within the Chinese A2/AD zones. The more areas, both land and sea that you can control and hold and manoeuvre around, the more options that you have.

What makes the MDTF's interesting is their makeup which includes all-domain I2CEWS battalions which provide, intelligence, information, cyber, electronic warfare and space capabilities, an air defence battalion to shield the TF, a strategic fires battalion which provides a mid-range battery, a HIMARS battery and a new long range hypersonic weapons battery and a finally a brigade support battalion. While basically a brigade structure it is quite clearly an organization that can be built upon as the cornerstone for augmentation by other resources (for example a light infantry battalion for added security and additional fires and air defence resources)

In a lot of ways, it has the ability to shield and act in a specific location while your ships and more mobile Marine units manoeuvre around to where they can be even more effective.

As for allied locations where such forces can be deployed - well, situations and relationships change over time. This is long range thinking - and about time too - having tool sets available to deploy and offer up, especially ones designed to be persistent, provides options. MDTFs and SFABs are just two and I expect, more will be coming.

I've been following generic blather about the multi-domain issues for several years now and this is the first time I've seen something concrete in how it will be done. More importantly it makes sense.

My guess is that there will be many more organizational changes that will create more equipment and units and formations that will be employable throughout the spectrum.

daftandbarmy said:
Which is why the Navy will continue to be the 'missile slingers' of choice. Politically and strategically much less contentious, and far more flexible tactically.
Click to expand...

Even better if many of those 'missile slingers' are SSN/SSGN, IMO.

Remember that a % of the VLS loadout on a surface combatant will be defensive in nature. And regardless of the loadout, you will probably run out faster than you think in a real conflict. So are you reloading at sea, or do you have a friendly port to go to? If regional partners won't allow ground-based missiles, shouldn't we be prepared for the eventuality that our ships may no longer be welcome in a time of crisis?

At the end of the day though, you have to give credit to the US Army and USMC for at least trying to prepare for the future battlefield...
You must log in or register to reply here.